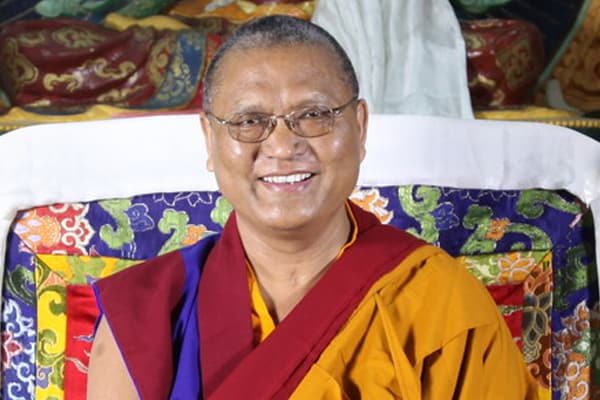 Menri Ponlob Rinpoche was born in 1962 in the small Himalayan village of Tsakha in the Dolpo region of northwestern Nepal. Many years ago, the. Dolpo region was a part of the Zhang-Zhung kingdom. In the Dolpo region we can still find the culture and language of Zhang-Zhung. There is a small Bonpo Monastery in Tsakha called Tarzong Phuntsok Ling Bonpo Monastery. Ponlob Rinpoche is a member of the famous lineage of Yangton lamas. The Yangton lineage goes back to the time of Buddha Tonpa Shenrab over 18,000 years ago. The Yangton lamas were the priests for the ancient kings of Tibet. The Yangton lineage originated after the great practitioner Yangton Sherab Gyaltsen became famous for the perfection of his understanding and excellence in Sutra, Tantra and Dzogchen Teachings. Through his studies he compiled the essence of the Dzogchen teachings and created the first written manuscript of the Dzogchen Experiential Transmission (Nyam-Gyud) teaching. In 1107 AD he became the single Transmission holder of the Bon Dzogchen teachings.

At the age of 13 and on the advice of his uncle, Ponlob Rinpoche went into a series of 3 months retreats during 1975, 1976 and 1977. In 1979, Ponlob Rinpoche’s brother, Lama Tashi, brought Rinpoche to Menri Monastery in India. His studies there focused on Sutra, Tanta and Dzogchen as well as ritual, grammar, poetry, astrology, divination, medicine, Thanka painting, Mandalas and stupas. Ponlob obtained his Geshe Degree (Doctorate) from the Bon Dialectic School in 1989. Soon after, Rinpoche was appointed Principle Instructor of the Bon Dialectic School by H.H. the 33rd Mentri Trizin and H.E. Yongzin Rinpoche. In 1992 he was further honored by being given the title of Ponlob, the second most revered position in Menri Monastery.

Ponlob Rinpoche continues to teach at the Bon Dialectic School where he is responsible for the training of the students. He occasionally visits the Dolpo region of Nepal to give the Transmission of Preliminary practices and teach other aspects of the Bon Religion to thousands of lay people, monks and Tantric practitioners. Ponlob regularly visits the United States and Europe where he enjoys teaching Sutra, Tantra and Dzogchen to Western practitioners.